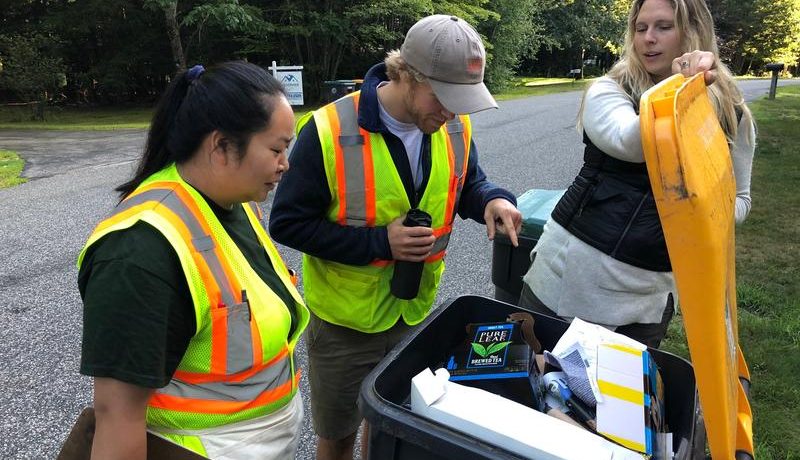 UNE Alumni Thorvald Arnell and Julie Gourlay shared an internship this past summer with Ecomaine to provide Mainers with direct feedback on recycling habits. On the morning of trash pick-up day, they walked through neighborhoods to peer into residential recycling receptacles. The goal was to see if the items were truly recyclable. Due to safety concerns, they could only look in the bins and not touch anything, but by peering into them they graded the bin with a red “oops” tag, yellow “oops” tag, or a green “go” tag meaning there was nothing wrong with the bin.

The goal of this project was to train as many people as possible to be recycling superstars. Ten interns were hired by four Maine communities including Scarborough, South Portland, Falmouth, and Windham. The urgency behind this idea was China’s recent decision to no longer accept recycling from the rest of the world because of too much trash contaminating the recycling. Instead of getting paid for recycling, Waste Management now has to pay to get rid of and sort the recycling. A term known as “Wish-Cycling” is becoming more common because people want to recycle, but if they don’t do it right, it may do more harm than good.

Arnell and Gourlay picked about 200 gallons of trash from the conveyer belt in less than ten minutes, including dirty diapers, basketballs, and plastic bags which get tangled in the sorting machines. Most residents had a positive experience and enjoyed being rewarded for their recycling efforts. Scarborough had a 7% decrease in contamination during the interns’ feedback period, which was the biggest improvement out of all the towns involved. Recycling efforts like this are important to increase awareness of the contamination issue.