When I started my college search, I had no idea where to begin. I was overwhelmed thinking about how the university I would someday attend would impact so many aspects of my life. How would I ever decide which one’s name would be on my diploma?

I started with the basics. I knew I wanted to attend a school that wasn’t too big, where I could get to know all of my classmates and professors and not just be a name attached to a grade. This was a big factor for me because like many others, I learn best in an environment where I can ask lots of questions and study in groups.

Speaking of environment, I decided the best setting for me would be somewhere a bit more rural rather than big city. UNE’s Biddeford Campus has an ideal mix of both— the campus is right on the ocean, but there’s still a Target close by.

The outdoors is a huge part of UNE’s campus life. There is over 4,000 feet of water frontage, allowing for lots of water activities such as kayaking, surfing and sailing. Mountains for hiking, biking and skiing are just minutes away too.

An important reason why I chose UNE is because of their excellent programs. UNE provides over fifty majors and minors ranging from biochemistry to marine entrepreneurship. After I decided I wanted to pursue a nursing major, UNE immediately moved to the top of my list. Their four year B.S.N. program has set students up to achieve their highest potential in the nursing field. In fact, UNE holds the highest three-year average for NCLEX-RN first-time pass rates in the state of Maine.

Another aspect that further influenced my decision to choose UNE was the switch I would make to the Portland Campus after my sophomore year. After spending four semesters of dorm life on the Biddeford Campus, students in the Nursing, Dental Hygiene and Pre-Pharmacy programs transfer to the Portland Campus to begin clinicals and delve deeper into their programs.

At first, this seemed intimidating to me, but as my sophomore year comes to a close, I’m eager for the next step in this program. I won’t lie, though— I’ll miss waking up to the breathtaking view of sailing lessons on the Saco River each morning.

I will never forget the day I came to visit UNE for the second time. My parents and I attended accepted students day. During the student tour, I met a group of girls who later became some of my best friends. I was also introduced to many supportive, down-to-earth professors and staff that ultimately reassured me that UNE was the school for me.

Once I got the chance to meet back up with my mom and dad, I told them I wanted to put down my deposit. They were ecstatic. That decision was one of the best I have made. I know even further down the road, I will thank my eighteen year-old self for choosing a college that provided me with lifetime friends, fantastic experiences and unforgettable memories. 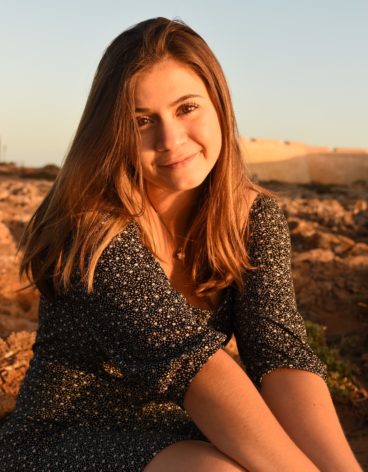 Elizabeth is currently working toward her Bachelor of Science in Nursing at UNE. She was fortunate to have the opportunity to study abroad in Seville, Spain, where she learned not only about the nursing field, but about different cultures throughout Europe. In the future, she plans to work as a Registered Nurse in a pediatric oncology unit. When she’s not studying, she enjoys hiking, photography and reading.