The University of New England is in the second year of its test-blind policy for undergraduate admission. Under this policy, most applicants’ SAT and ACT scores will not be considered among criteria for admission to UNE.

In this post, we ask UNE’s Vice President for University Admissions Scott E. Steinberg, MBA, to explain the difference between test-optional and test-blind and share why a test-blind policy makes sense for UNE.

What is the difference between test-optional and test-blind admission?

Test-optional: Although policies can differ from one school to another, most commonly, test-optional means that students can choose whether or not to submit standardized testing (SAT, ACT) for consideration.

Test-blind: Standardized testing will not be considered in the admission decision. In other words, test scores cannot be submitted.

Why test-blind instead of test-optional?

Because a test-optional policy does not go far enough for students.

Is that why UNE went test-blind?

Yes. The test-blind policy is an expansion of our test-optional policy, which launched in 2018 and resulted in the largest and most ethnically diverse first-year class in UNE history, without any reduction in academic quality.

Our test-blind policy was adopted during the 2020-21 academic year, in part, due to statistical evidence that standardized test scores are not a reliable indicator of how undergraduate students will perform in college and, in part, due to complications in the administration of such tests amid the coronavirus pandemic.

How has the pandemic affected testing policies?

The number of colleges adopting test-optional policies continues to grow. According to FairTest, around 75 percent of U.S. four-year colleges and universities are test-optional for fall 2022; half have already announced their intention to continue this for 2023.

During the pandemic, the focus on standardized tests has caused more anxiety than ever for high school students, their parents, and high school counselors. I saw this first-hand with my daughter, who graduated from high school in 2021 and is now a first-year student at another university. A number of test administrations of the ACT and SAT were canceled early in the pandemic. My daughter – and many of her friends – were panicked, as they literally could not get test dates for the SAT and ACT. They wondered if not submitting their test scores to a test-optional university – most of them newly test-optional — would hurt their chances of admission.

Was that concern warranted? Should applicants be concerned about acceptance rates when it comes to submitting their standardized test scores?

It has become clear that for some colleges and universities there is a divide in acceptance rates between “test-submitters” (those who submit SAT / ACT results) and “non-submitters” (those who do not submit test results), with test-submitters showing higher acceptance rates. The reasoning? Test-optional schools tend to see increases in the numbers of students who apply, along with decreases in the numbers of lower scores reported, thus inflating average test scores and making schools appear more selective.

(As an aside, I would suggest that anyone applying to a test-optional school ask the following questions of the admissions office: “What percentage of your applicants submitted tests last year?” and “What were the acceptance rates for your test-submitters and non-submitters?” Be prepared for some evasive maneuvering in the responses. Believe me, they know the answer.)

So, we decided to take the question of standardized testing – and its inherent biases — entirely off the table.

Even putting current concerns generated by the pandemic aside, the adoption of a test-blind policy makes sense for UNE, which was only the fourth institution of higher education in the U.S. to implement such a measure. A student’s performance in high school is the most significant predictor of academic success at UNE. Standardized tests provide very little – if any – incremental value beyond a student’s high school academic record.

UNE’s test-blind policy continues for the 2021-22 admissions cycle and includes students who plan to enroll in the spring and fall of 2022. While some exceptions to the policy apply, all excepted applicants, aside from some international students, will be able to choose whether or not they submit test scores. For more information, we encourage you to visit UNE’s Undergraduate Admissions test policy page or email admissions@une.edu. 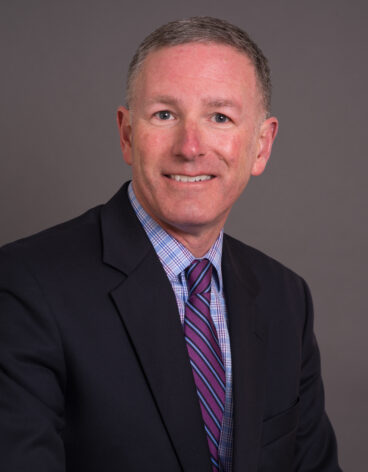 Scott is the Vice President of University Admissions at the University of New England, with responsibility for undergraduate and graduate admissions. Prior to UNE, he served in positions at Bates College, University of Southern Maine, and Bowdoin College. Before transitioning to higher education, he was a marketing director at the New York Life Insurance Company. Mr. Steinberg earned his Master of Business Administration in marketing and finance from Columbia University Graduate School of Business and his Bachelor of Arts in mathematics and music from Bates College.